Our mission at Shelbyville Central High School, enhanced by the support of parents and the community, is to provide a safe and positive learning environment that takes into consideration students' individual styles and rates of progress while establishing a basis for life-long learning. Students will be provided with challenges and opportunities that develop cultural awareness, social skills needed for the workplace, and qualities which will enable them to become productive citizens. 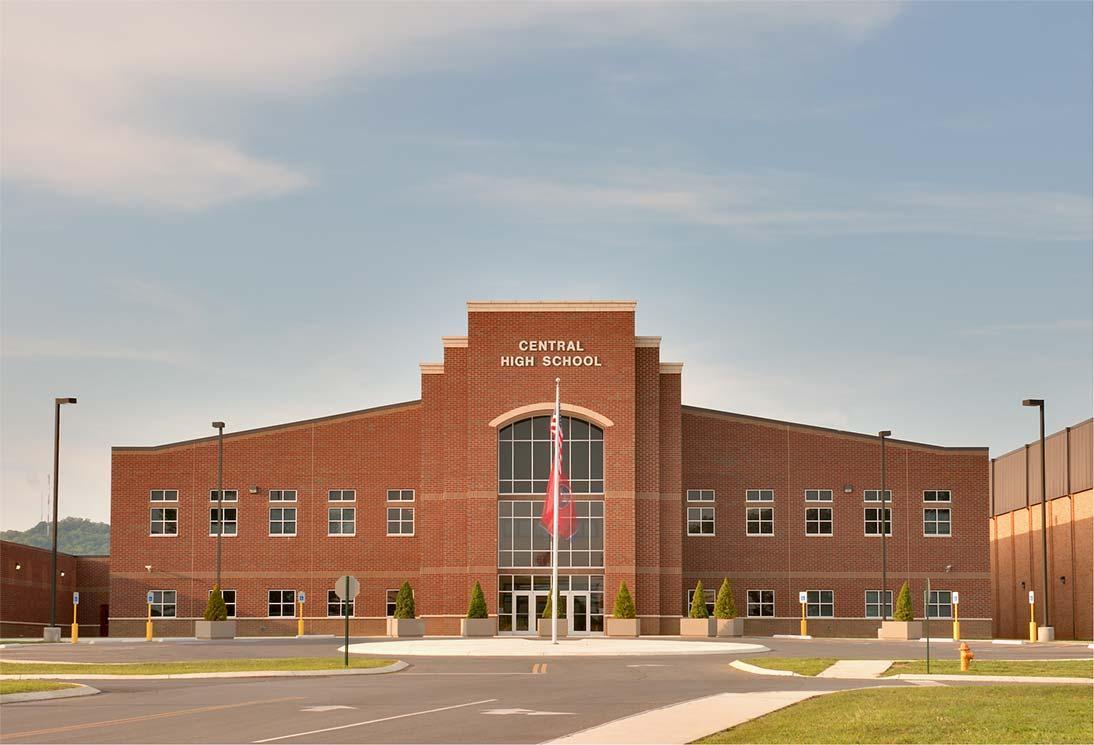 Until 1924, Bedford County high school students had paid a tuition fee to attend grades nine through twelve of Brandon School, housed with grades one through eight in the building which later came to be known as East Side Elementary School.

In December of that year, 150 high school students marched in a body from the old building, via the public square where they stopped to be led in school cheers of various kinds, to the recently completed new building on Bryant Street. This student body and the new building became known as Central High School. Its first principal was Mr. Goodrich from Fayetteville, Tennessee. Mr. Goodrich served in this position until 1927, at which time Mr. Garner became the principal. From its beginning, the school had a fine reputation for high scholastic standards and highly competitive athletic teams.

In 1928, J. H. Moore accepted the position of principal. Several new subjects were offered for the first time, new departments were set up, and the dramatic presentations were presented under the direction of Mrs. John Kelly Breast and Mrs. J. H. Moore. Even at that time, the Dramatics Club and the musically talented students of the school collaborated and, under the direction of Mr. Roy Ashley, produced many outstanding musicals. The first typing and shorthand classes were taught, and for the first time a Home Economics Department was set up. It was during this time that the school adopted the Golden Eagle as its symbol, and the athletic teams became known as the Golden Eagles.

Mr. Moore was principal of the school until the fall of 1935 when L. I. Mills, who had been headmaster at the Morgan School in Petersburg, Tennessee, came to Shelbyville to become the principal at Central. Mr. Mills, who was a legend in his own time, was well known for his scholarship, especially in American history, his strict rules of discipline, and his love of football. From 1936 to 1940, the Golden Eagles football teams lost only one regular season game, to Tullahoma. In 1938, the Golden Eagles football team was Central Tennessee Champions and played for the State Championship. This era set a precedent which continues to the present. The Golden Eagles and Eaglettes have fielded many standout teams, twelve of which have reached the ultimate goal - a state championship.

The student body had grown steadily since the beginning and the county made plans to build a new school plant on Elm Street. In 1939, the beautiful and very modern building on Elm Street was completed. The student body moved from the Bryant Street building to the building that was to be the home of Central High School until the fall of 1977 when the new facility on Eagle Boulevard opened.

In 1944-45, Central published its first yearbook, the Aquila; and in 1946-47, the first band classes were taught and the Central High School band was born. Mr. Mills served as principal until 1947, when Vernon Johnson became principal. It was during his tenure that the groundwork was laid for Central to be evaluated for membership in the Southern Association of Secondary Schools and Colleges. Mr. C.0. Jett became principal in the fall of 1949, the same year that Central became a member of the Southern Association of Secondary Schools and Colleges. It has remained accredited continually since that time.

After the McAdams School came a joint venture of the county and the city for grades 1-12. The name of the school was Bedford County Training School. The principal was Professor Sidney Harris. He remained from 1935 until 1965. During his tenure, the school’s football team, the “Fighting Tigers” led by Coach Edward Finley, was undefeated from 1943 through 1950 with a record of 82-0-4. In 1961, the school's name was changed to Harris High School in honor of Professor Harris. The girls’ basketball team was state champions in 1965, the same year that Will P. Martin became the principal of Harris High School. He remained principal until the school was merged with Central High School in 1967.

About Our School and Community

Shelbyville Central High School is a public four-year high school in Bedford County, Tennessee. The school opened in its present facility in 1977 but traces its existence to 1924. The Southern Association of Colleges and Schools has continually accredited SCHS since 1949.  The school follows the semester plan with ½ credit earned per course per semester. The daily schedule is a combination of a traditional seven-period day with each class meeting a minimum of 50 minutes and a modified block schedule. The school year is 180 days. The ACT code is 432-120.
Shelbyville is located in southern middle Tennessee, 30 miles south of Murfreesboro. With a population of approximately 16,000, there is a mix of heavy industry, retail, and service employment. Long the center of the Tennessee walking horse industry, Shelbyville is host to the annual Tennessee Walking Horse National Celebration, a ten-day event each August with attendance of over 100,000. Other prominent industries include pencil manufacturing, auto and truck parts, Tyson Inc., and a Wal-Mart distribution center. Shelbyville is home to the first Tennessee Technology Center and is near Motlow State Community College and Middle Tennessee State University.